Transformation has been a recurring topic this spring among speakers at retail technology conferences. It is not uncommon to hear transformation out of one side of their mouth and disruption out of the other.

Pitney Bowes’ CEO Marc Lautenbach offered one of the better perspectives on transformation in late April at his company’s inaugural (R)Evolution conference. Not only is he guiding Pitney Bowes’ own transformation, his team offers the retail industry a platform upon which brands and retailers can evolve their global retail operations to better serve today’s cross-border shopper.

Marc talked about living through a period of transformation at IBM that started in 1995. Seven years prior to 1995, IBM’s biggest problem was what to do with all its cash. That changed rather quickly.

As he looked out into the future, one where Pitney Bowes serves as an agent of change within the retail sector, he offered the audience seven timely take-aways.

Change comes quickly as markets rise and fall. One dynamic doesn’t change; incumbents get disrupted.  One-time industry leaders like IBM, GM and Sears have all lived it. They have survived to talk about it.  For now, at least.

Marc talked about how the IBM of the nineties had not adequately prepared for change. IBM’s leadership didn’t heed the lessons from past decades as they collectively witnessed members of the Fortune 500 rise, only to fall. As a result, IBM needed to play catch-up. Some would argue that IBM is once again playing catch-up.

In the retail industry today, Marc said you have two choices — embrace change or put your head in the sand. 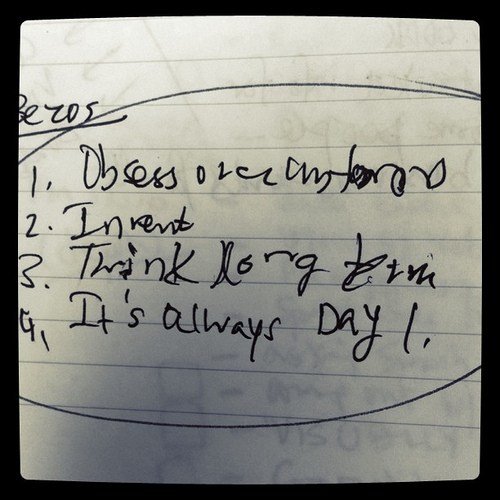 Like many speakers on the digital commerce circuit, Marc’s story about the transformation of retail starts with the rise of Amazon in 1994.  He pointed out that it has taken Amazon less than 25 years to build a market cap of $450 billion plus.

Marc stressed that understanding and anticipating what a customer wants is the key to surviving into the future. He encouraged the audience to read Jeff Bezos’ letter to shareholders to appreciate why Amazon always thinks it is Day 1 — and why Amazon’s success is tied directly to its fixation on the client.

Marc spoke about how this lesson has helped shape his vision for Pitney Bowes’ transition.  He reflected on an executive event at Silicon Valley which featured a mixture of execs from older companies – a virtual who’s who of big tech brands as he put it – and a group of startups.

The old company guys were passionate about a product – if not two. The start-ups were focused on how the market was changing before their eyes.  They talked about how customers were driving change.

Marc reminded us that there is always a half-life to a product or service. Companies with a second chapter are those that could transition their thinking from product to the market and to the client.  Transitioning thinking in this manner is how companies create value today.

Marc stressed that retail channels have become less important. Why? In part because channels separate companies from their customer.

Those that get disintermediated from the customer place their future at risk by doing so. He explained that the reason we see so many companies being left behind today is that they don’t spend enough time thinking about the necessity of customer-proximity, at least not in a hard-enough way.

From Day 1 of executing a transformation, companies need to be clear about where they are heading.  Employees need to understand as well as clients.  Writing your own letter to your stakeholders may be a good way to prep for transformation.

Marc stressed that today very few companies live in both the physical and digital world. As a result, disruption will and should happen.

A firm’s culture is key to successfully riding the waves of disruption. Culture defines an organization’s collective capacity to deliver value.  How you create value determines where you head — and how you get there. 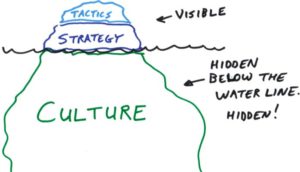 Marc reminded us that Pitney Bowes had been innovative for decades. A while ago perhaps, before many of today’s younger executives had come of age.

More recently the company had made a slew of acquisitions.  Some really solid, others less so.

But Pitney Bowes hadn’t been in a good fight for a while. Sometimes a good fight lets you know who you really are – and what you’re made of (our words, not his :>).

Marc also shared a lesson from an executive training exercise.  The executives were asked to write their company’s obituary – both the good and bad.  He encouraged the audience to do this themselves* because it makes leaders stop and think about why they succeed … or fail.

Doing so can also clarify your thinking. If you have a clear view, then you can move with speed and purpose. Both are crucial to survival.  But doing both simultaneously can challenging.  For instance, Kodak saw the future, but couldn’t move fast enough.

On the right path

Those on Wall Street and in the press that have been writing retail’s obituary this spring have missed the point.  Retail isn’t dying.  To the contrary, it is healthy, thriving and full of innovation.

However, the state of retail’s transformation is accelerating. Tomorrow’s leaders are driving the evolution.

Pitney Bowes appears to have the leadership vision, the culture and the opportunity to help accelerate the evolution of retail.

The GELF community certainly believes that the future of retail is a global shopping world without borders. Other leaders in the ecommerce industry think the same.

Companies like Pitney Bowes are transforming in lockstep with their customers. The challenge is staying in stride alongside their clients.  Often they will need to take the lead; other times following closely behind the customer will be good enough.

Marc is correct that it is a fascinating time to be an innovator in retail. Both peril and opportunity await.

It’s also important to remember that surviving the peril while seizing the opportunity is more about keeping up with the customer than with the competition.

*Check out Why leaders should write their own companies obituary. By James Allen of the Wall Street Journal