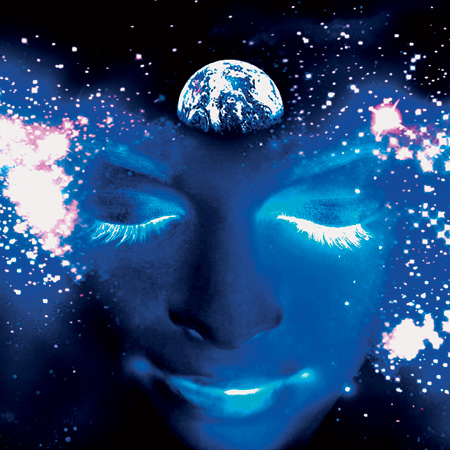 As yet another spring commerce platform tour season winds down, the GELF team is weighing in with thoughts and reflections on the busy season.

One highlight was VTEX Day, which some call the “IRCE of Latin America.” I had the pleasure of attending VTEX Day this year for the first time as a keynoter on the Emerging Cross-Border Ecommerce track.

In a word, VTEX Day was a Blast

And in many ways, a blast from the past.  The energy of the attendees and their excitement about digital commerce reminded me of the U.S. ecommerce community from the early 21st century.  Ahh, to be young and hyper-psyched again.

Even with all the headwinds facing Brazil, the crowd was super enthusiastic about the growth in ecommerce throughout Latin America.  Especially the digital start-ups.

The digital entrepreneur track was adjacent to the cross-border track. From the explosions of cheers and the hoots and howls emanating from that track, you would have thought they were giving away brand new SUVs every fifteen minutes – or that the Shark Tank hosts were moderating.

Interestingly enough, based on conversations with the LATAM digital commerce entrepreneurial set, Mark Cuban may be the most popular guy in the LATAM ecommerce space. Go figure.

All about Cross-Border Ecommerce

Whether they worked for large retailers like Netshoes and Falabella, hot digital ecommerce pureplays such as Farfetch or large brands like Adidas or Air France, digital is clearly the future of LATAM retail – and cross-border strategies are the fast track to growth.

VTEX Day draws attendees from all over Latin America.  I met with folks from Peru, Chile, Colombia, Argentina as well as smaller markets like Paraguay and Ecuador.  In part because Brazil still faces a lot of internal economic issues, most attendees were very interested in learning more about extending the reach of their ecommerce operations into the US (the topic of my speech) and to Europe (especially into the UK).

There was also lots of interest in investing more resources into intra-LATAM trade lanes, with Colombia, Chile and Mexico being mentioned as some of the hottest markets of interest within the continent. Most agreed that Argentina was on the comeback and that Venezuela remains a lost cause for the foreseeable future.

The US Opportunity for LATAM Sellers

Given the economic challenges inside Brazil, I was asked to help the audience better understand the US ecommerce opportunity; in part as a way for them to diversify the scope of their ecommerce operations.

Make no mistake, Brazil remains a huge, vibrant market where ecommerce is a growing force.  And Sao Paulo is the center of commerce.  From the penthouse deck of the VTEX HQ, one has a near-360 degree view of “downtown” Sao Paulo – and there are nothing but skyscrapers for as far as one can see. You can argue whether Sao Paulo is bigger than New York City or vice versa.  It sure feels bigger.

B-to-C eCommerce sales in Brazil in 2015 were somewhere between $11B and $12B US.  There are a lot of similarities between the US and Brazil: the biggest countries in their hemisphere, both countries are top five global countries in size and population and both are rich in natural resources.  Brazil and the U.S. are probably two of the most ethnically/racially diverse countries in this world.  Plus, retailers based in both countries are very focused on their own domestic ecommerce opportunities. 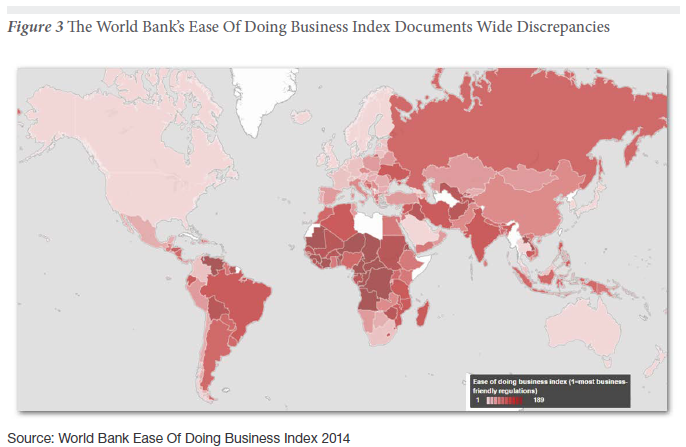 The big difference is that Brazil and the U.S. are quite different when it comes to the ease of doing business.  And the challenges of moving product into Brazil from outside its borders is the stuff legends are made of. Bureaucracy, corruption and other regulatory barriers to entry can make exporting into Brazil a real pain.  Hopefully this all changes in due time, but few Brazilians hold out hope that much will change soon.

On the other hand, the Brazilian people themselves are fueling the rise of digital commerce.  My presentation pointed out how Brazilians are much more “social” than those of us in the states.  They are definitely connected – almost half of respondents to the AT Kearney analysis highlighted below are on their devices all day long. This is almost twice the rate of the US (and of the global average). 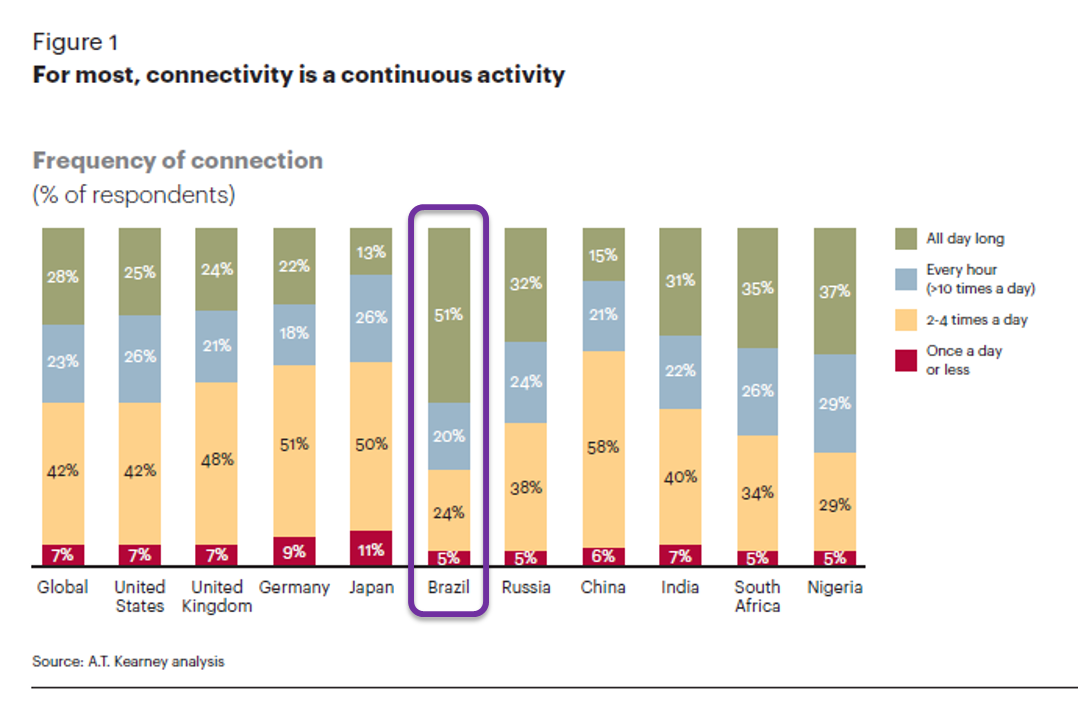 Yet their mobile purchasing behavior still reflects the typical adoption path we’ve seen for years as emerging markets evolve to emerged status and then mature.  Instead of buying clothes on their mobile devices, they are still buying books, travel and, yup, bigger and better mobile phones. Interestingly, home appliance sales are also a much bigger category for online penetration than in the U.S.

Even though the US ecommerce market looks very mature, I encouraged the audience to take advantage of areas where they already are on par with the US or ahead – like social and mobile – and leverage best practices to gain traction in the US.

As the chart from the UPS study highlights, the US market is indeed maturing.  The US ecommerce growth rate is roughly 15% these days.  But cross-border ecommerce growth is nearly double that – at 27%. 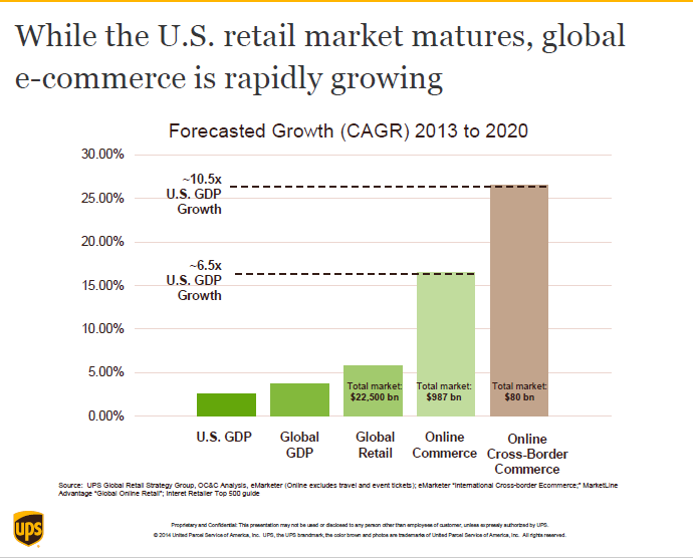 What are the drivers for LATAM cross-border, esp into the US?  The rise in the de minimis is one — now sellers outside the US can get product into the US duty free when under $800.  That’s a big jump from $200 last year.

The bad news for Brazilian retailers targeting US consumers is that the whole world of retail benefits from the higher duty-free threshold.   So smart LATAM sellers will need to plan for more competition across the board.

Cross-border logistics and competing with Amazon are two other challenges that LATAM sellers will have to address.  Still, sellers of unique products and merchants that work with proven logistics partners should have bountiful opportunities.

Plus Amazon can be an ally as well; we expect to see more and more third party sellers on Amazon originate from markets outside the U.S. Marketplaces – Amazon and otherwise – are great ways for LATAM brands to test the waters and navigate some of the chop they will face as they enter the US.

VTEX Entering the US

Speaking of entering the U.S., a big shout out to the VTEX team for hosting me and the ecommerce guys from the UK – as well the other 6,000 to 9,000 attendees at VTEX Day. I’ve gotten to know the VTEX “advance team” over the years, mostly in yearly visits at IRCE in Chicago and via briefings with Alexandre Soncini (soncini@vtex.com) and his team.

It’s great to see that the VTEX leadership is investing in the US market by opening its first US office in Miami. It was really an eye-opener to spend the week with the VTEX team; traveling from their Rio office – the VTEX Lab – down to the main headquarters in heart of Sao Paulo.

Super nice people, rich in technology and development talent and highly focused on the needs of their clients.  Great energy (maybe even too much, esp on the late night side of things) and a rather unique, global-first vision of the future of ecommerce.

VTEX has built an amazingly diverse roster of clients ranging from big multinational brands like Disney, Lancome, Sony, KitchenAid, Calvin Klein and L’Oreal to fast-growing retailers like Fit By Sue and Colombia’s Totto. 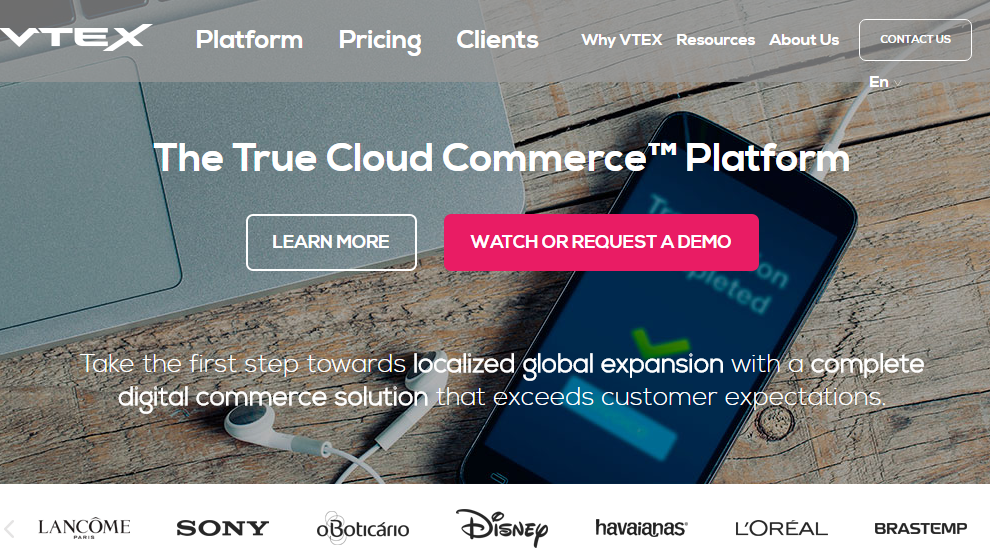 The company’s timing is excellent as the market in the US for true cloud commerce plays is taking off and more and more brands are re-platforming in order to move off aging ecommerce platforms and built-in-house ecommerce monoliths from the turn of the century.

Taking it To the Next Level!

The last fifteen plus years have gone by in flash for those of us plying the ecommerce trade in some way, shape or form.  So it is very refreshing to hop on board an ecommerce time machine and revisit the glorious past – even if it takes an eleven flight to get there!

And this is true even when the charms of international growth – like a presidential impeachment stirring up the population or the cab drivers abandoning the airport and blocking the just-legalized Uber drivers from whisking away all the stranded travelers – are in full flower.

Embrace it all. International expansion will certainly keep you on your toes. Sounds more and more like its time to let the Latin ecommerce beat take your digital commerce to the next level!